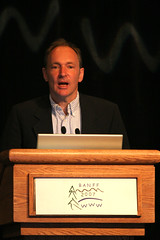 Spent 24 hours (door-to-door) traveling over to Banff for the WWW2007 conference, and we've now been here for a couple of days. The standard of conversation (all the sessions bar the keynote have been very interactive) has been very good.

The thrust that I'm seeing and hearing here is one of Linked and Open Data. Getting as much data as people can up on the semantic web using Cool URIs, RDF, GRRDL and other bits of the puzzle - the message from Tim and close friends is "do it now".

This probably shouldn't be a surprise, 2007 has been heralded as the make or break year.

I haven't been blogging much as Paul's doing an excellent job over at Nodalities. But there are some interesting points coming out consistently.

First, and interesting, is the importance of the graph. The idea that the web is successful because of its chaos and freedom. This needs to be the same with Linked and Open Data. Trees are distinctly passé, as are tables and, frankly, anything that's not simply a graph.

This is a trend happening in many places, not just on the web. In OO programming languages, for example, there is a move to favour composition over inheritance - a graph over a tree.

There's also a big thrust around provenance - if you have a lot of data that you're mixing together you want to know where the bits came from, so you can make decisions on their authoritiveness. In his keynote Tim suggested that triple stores should really have four columns - subject, predicate, object, provenance.

Today was my turn to voice some stuff, along with

We were talking about various aspects of Open Data. Steve gave a great animated show of GPS data gathered for London by couriers, Peter talked about the need for openness in scientific publishing and Jamie talked brilliantly about the reasons to open data you might otherwise think is core to your business. I was talking about the importance of making your licensing clear.

The slides are online here, Peter presented direct from his blog, and Paul's talking about the panel over on Nodalities.