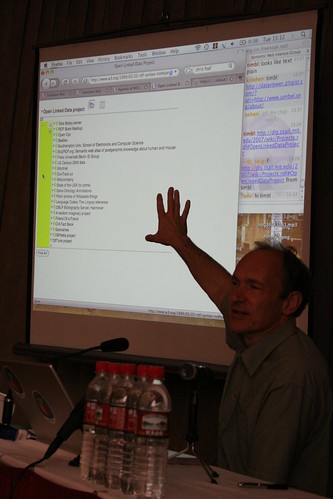 Linked Data on the Web 2008, a workshop attached to WWW2008, was today's main attraction for about 100 of us here in Beijing.

Sir Tim opened the workshop again this year and was popping in at regular intervals throughout the day. His opening included the great soundbyte: "Linked Data is the Semantic Web done right, and the Web done right".

What he means by that is that the linked open data project is the closest we have to his original vision of a web of knowledge.

A number of new RDF browsers were on show this year with Sir Tim showing off version 2 of The Tabulator which provides read/write functionality via HTTP POST or WebDAV. Visual browsers, including relation browser, popped up a few times, including a great session from Uldis Bojars on Browsing Linked Data with Fenfire (standing in for Tuuka Hastrup) which looks like a great tool for playing with small amounts of semweb data. Like The Tabulator v2 Fenfire allows editing of the data - must take a look at that.

The Linked Data map continues to grow, but there were no new announcements today, although I know a few people have stuff lined up but just aren't ready to 'go big' with it just yet. This map featured in every set of slides during the day by my reckoning. In ten years time people will be showing that on slides just after the photo of Sir Tim's first server at CERN!

Kingsley Idehen kept the session real by keeping up the "give us a demo" riff throughout the day - a constant reminder that most of this stuff is practical, real stuff now. Although, being a fairly academic crowd there was plenty of discussion of theory too.

The key theme that I took away from the day was that disambiguation is (one of) the next big problem(s) the Semantic Web has to tackle. Without this having been discussed ahead of time, several people presented discussions or solutions on the problem. I presented on the use of natural keys in URIs as one aspect (a paper written by myself, Nadeem Shabir and Danny Ayers); Humboldt was suggested as a possible candidate by Kingsley Idehen and others and Afraz Jaffri spoke explicitly about URI disambiguation in the Context of Linked Data. Other aspects of disambguation were presented by Alexandre Passant in Meaning Of A Tag: A collaborative approach to bridge the gap between tagging and Linked Data.

Another great sign of this all getting real was the warm reception that Paul's talk on Open Data Licensing got. In the same way that the open-source community matured and embraced licensing and the was that the blogosphere, photo and video sharing sites matured and embraced Creative Commons, we need the Linked Data community to mature and one aspect of that is to embrace licensing - clear statements of the terms under which all of this data is published.

The day's sessions ended on a great discussion of the issues of distributed conversation, statements spread across the web, when we have combined the URI as identifier and the URI as locator of the content. That is, how do you ask http://example.com what it knows about http://foo.com. Or, more importantly, how do you know that you should ask http://example.com in the first place. Given that we want to be able to let anyone say anything about anything else, and that we want to be able to find everything that has been said about something, this is also going to be a key focus.

The need for disambiguation and the need for discovery of statements overlap in what Paolo Bouquet presented - An Entity Name System for Linking Semantic Web Data. Paolo presents an attempt to model a (philosophically) DNS like system, ENS, to address these problems. Controversially he suggests everyone use identifiers within their own internet domains to make statements, then use ENS based identifiers as the single unique reference off which everyone's URIs then hang. Now that got the debate going!

More of my photos are tagged LDOW2008 on Flickr.

Hi Rob, This is Jana from the Semantic Web Company in Vienna - you probably already have your conference pass, but if not: I just wanted to invite you to participate in our Linking Open Data Vision Competition. Prize is a conference pass for LinkedData Planet in New York - we can't fund travel expenses, but the prize itself is worth $1095 (oh, and TBL is giving a keynote:-) Link to the competition is behind my name. Best wishes