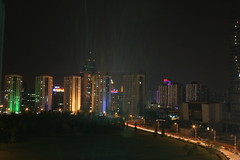 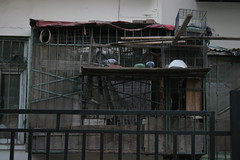 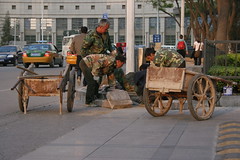 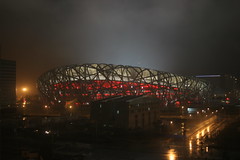 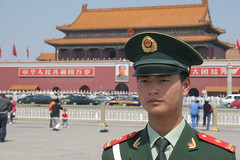 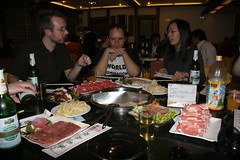 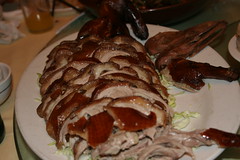 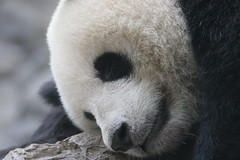 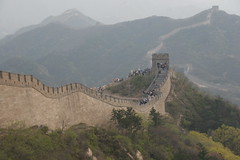 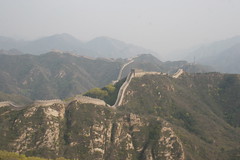 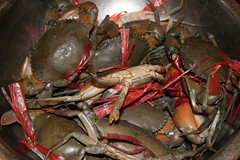 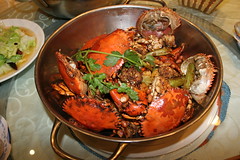 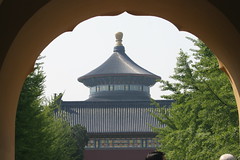 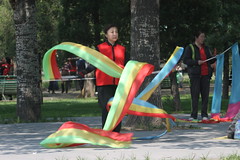 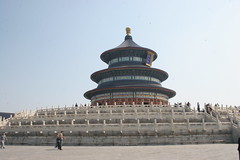 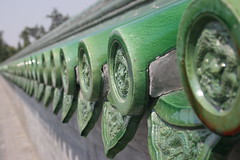 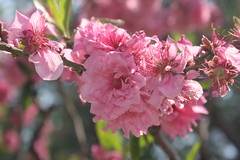 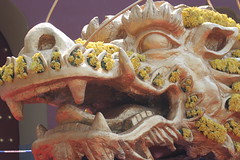 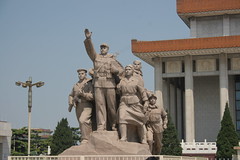 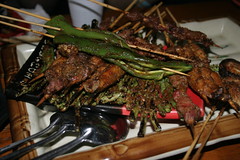 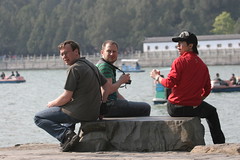 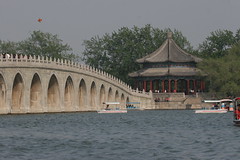 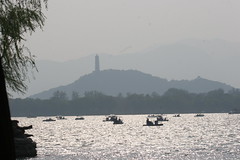 This wasn't what I expected of the vast sprawling city of Beijing. I don't know what I did expect. The grey stone and imposing buildings of Tiananmen Square, Mao's Tomb and the Great Hall of the People perhaps. Or maybe the flocks of bicycles. A view built mostly on UK coverage of the Tiananmen Square uprising of nearly twenty years ago.

We see these short tableaux of places in times of crisis and they sit, static, in our minds while the place itself moves. Always having been so much more than what we saw anyway. The Beijing we met was busy all the time, streets full of people into the early hours. Not revelers and police, though there is some of that, but lots of men and women just going about their business.

Driving in Beijing appears to be a more or less constant game of lane-change chicken. Everything is done in close proximity, with cars maneuvering on the three-lane ring roads (of which there are seven or eight) within inches of each other. Horns beep constantly, but not in the aggressive way they are used in the UK, but as a constant "I'm here", "That's my space" kind of way that no-one seems to take offence to.

The city is, of course, rushing headlong towards the August deadline of the 2008 Summer Olympics. We saw nowhere that wasn't undergoing some work. New paving here, a new road there, replacing the tiles on hotel frontages. There was also much more substantial construction work happening with new tower block going up in many places around the center. The center, that's an interesting aside - Beijing doesn't really seem to have a center. Sure there are ring roads that go around an area, but the city is so large, so spread out that it really has no distinct point - apart from Tiananmen Square, of course.

Tiananmen forms a nice point from which to discuss the some of tourist sights, with the Forbidden City adjoining it to the North (?) and the Temple of Heaven just a short taxi ride (costs about 180RMB) to the south. We were also driven out to the Great Wall at Badaling by a friend of a friend and spent a couple of hours walking a short section there, Badaling is about an hour's drive from Beijing in a car (or two on a tour bus). And of course, also a little way out of the city is the Summer Palace.

Our time in Beijing was short, seven days in Beijing, five days were taken up with the WWW2008 conference (and a bit of hotel shuffling). A further day on each end of the trip to travel. So with restaurants to try every evening and just two days to see things we had to make our time count.

Food was important, with a fantastic Chinese community here in Birmingham providing amazing food it seemed like a good idea to try equivalents in Beijing as well as looking for things we can't get at home. Something we had not seen at home is the Hot pot, or Chinese Fondue, which involves a central pot with stock or oil, heated from below, in which you cook your own meat, fish and veggies. Really great food.

Beijing, formerly known as Peking, is famous for its Duck restaurants, so no trip would be complete without a visit. The duck was great, about a dozen of devoured wood-burning oven-roast ducks with pancakes, hoisin sauce and shredded spring onions and cucumber. What impressed me was not so much the quality of the duck here in Beijing, but bizarrely the quality of the duck we get back here in the UK which comes very close to what we we were served. The most notable difference is that here in the UK I've never seen the head served with the rest of the meat.

Saturday morning we got up early and hit the subway to make our way to Beijing Zoo, we already had the trip to Badaling lined up for the afternoon, so needed something easy to do in the time and we all decided we wanted to see pandas. We got to see the pandas, sleeping in the heat, trying to ignore the crowds with cameras. Beijing zoo's enclosures look small, they're definitely zoo and not safari park. We rushed round a few of the main large animal enclosures and headed back to the hotel.

We weren't at the hotel for long when our host for the weekend, a friend of a friend, arrived to pick us up. He'd very kindly agreed to show us around and our first target was the Great Wall.

Pictures of the wall give you a pretty good idea of the size of it, the wall alone is intimidating. What you don't get a sense of is the geography in which it's built. The wall rides the tops of steep sided ridges, sharp edges with steep slopes either side, a formidable obstacle in their own right.

The most disappointing aspect of the wall was the number of little stalls and wall-walkers attempting to sell you utter tat.

After a couple of hours walking on the wall (following a busy week conferencing as well) we were all more than ready for food. Our kind host had spent a few years here in Birmingham, so was well aware of how good the Chinese food available here is. With this knowledge he wanted to ensure we got food in Beijing that we can't get in Birmingham. We'd already had hot pot and none of us really fancied the frogs on offer so we ended up in a restaurant famous for its crab.

The crabs arrived raw, so we could decide how many we wanted between us, then came back around ten minutes later, cooked and cracked in a spicy paste. Chris and I are not great fans of crab here in the UK, they seem to taste like seaweed to me, but these are fresh water crabs and they taste completely different. The crabs were meaty and very tasty indeed.

Next day we managed to get up early, check out and dump our bags with the concierge ahead of a day exploring then the flight home. We got ourselves over to the Temple of Heaven first. Set in beautiful grounds, surrounded by lawns and paths shaded by cherry blossom trees the temple is visible from some distance. Beautifully tranquil, despite the number of people. The temple is very well maintained, a little too well maintained in some respects, you could almost believe it was new.

From there we cut across through Tiananmen Square passed Mao's Mausoleum and into the park around the forbidden city. It was getting hot by now, the sun very bright, so the shade of the woods was very welcome. The sun, and the impending need for some lunch, made u decide not to spend the apparent two hours queuing to get into the Forbidden City. Instead we met up again with our kind host and he took us to a great barbeque place where we had lamb, beef, big green chilies, chicken wings and squid. All served on kebab sticks. Very spicy, very good.

From there we wanted somewhere to unwind a bit, so a trip to the lake at the Summer Palace was perfect. We wandered around for a while (trying to find a loo and cussing the unhelpful signs) and then hired a boat for a trip out on the lake.

Being out on the water was cool and relaxing, Chris' advanced driving skills came in handy controlling the high-powered vessel we had, blasting across the water at just under strolling speed.

The lake (Kunming Lake) is huge and beautiful, so huge that you would never guess that it was man-made. The Emperor had it dug out, combining two previous ponds, to make the current lake.

A short shopping trip later and we were back at the hotel to pick up our bags and off to the airport.

One of the great things about working for Talis is that we take conferences seriously. Having sent five of us half-way around the globe staying an extra couple of days, eating well and being expected by those back at the office to make the most of it is part of having a great work/life balance.

I don't know how many other companies have quite such an enlightened outlook - I guess it's because we're employee owned, so Talis is us.