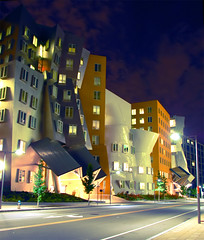 Nadeem and I have been working on several ontologies (for RDF) over the past few months and are intending to publish all of them.

The first to get published is an initial cut of AIISO (pronounced ey-s-oh pronunciation key), the Academic Institution Internal Structure Ontology.

We put this together really quickly to cover an internal need to document the departmental, school and faculty structures of higher education institutions. As of writing we know of two issues with it...

it's clear to us as people that the faculty of science is a part of Broadminster, but it's not obvious from the ontology that's what's going on. We plan to change that to either use our own partOf property or possibly re-use dcterms:partOf within aiiso.

The other thing we failed to do was to make the appropriate links with FOAF. Aiiso's OrganisalUnit is a specialisation of foaf:Group, so that needs to go into the ontology.

The other thing that's come up in conversation that we're fairly sure we've got right (though others disagree) is that the descriptions are somewhat self-referential. A faculty, for example, is described as follows:

Perhaps faculty is reasonably consistent, but college and school certain vary substantially and are re-used in areas outside of higher education. My secondary school is certainly not the same kind of thing as the Winchester School of Art, a part of the University of Southampton.

I think the way to solve this is for aiiso to become clearer about its scope, its intention to describe higher education institutions and not other parts of the academic sector. That leaves others free to define ontologies for kindergarten, high school and the rest.