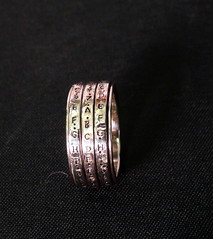 Cory Doctorow asked Bruce Schneier to give him a hand designing wedding rings. Not an obvious combination until you realise these are crypto rings...

There are two great discussions going on over at both blogs. Cory has asked his crowd to help design a cipher for his crypto wedding rings. While Bruce simply said Contest: Cory Doctorow's Cipher Wheel Rings.

The discussion on both posts is worth reading. A mixture of things popping up about the similarity between the three rings and the Enigma machine as well as comments about Jefferson's Wheel Cipher.

Like most things Cory does (or says) there's an element of the slightly bizarre. The prize, a not to be sniffed-at signed copy of Little Brother.

Comparisons with the Enigma machine, I suspect, are bogus. While there is a visual similarity with the Enigma's wheels the Enigma's cipher was implemented in the electronics within the machine. The letters on the rotors simply enabling the correct starting positions to be selected. The Enigma machines perform a substitution cipher, but with the additional complexity that the substitution pattern changes for each letter through the message. I don't see a way to do that with these rings. There may be rotor ciphers that could be implemented - I don't know.

Jefferson's cipher is a much closer match, a fully manual system consisting of 26 wheels with the alphabet scrambled differently on each one. Similar to the Enigma machine, sender and receiver had to have the order of the wheels synchronised and each letter would use a different substitution scheme, though Jefferson's not as thorough as the Enigma.

As the rings cannot be altered and the alphabet is in order on all three wheels, any attempt that results in one character of cipher text for each character of plain text will be a simple substitution cipher. While it may take several complex steps to arrive at the cipher character it will only take an attacker one step to go back.

So, if you're thinking about this problem seriously there are some things you have to decide on first...

Then, of course, you have to decide what to do with the rings. Any Cryptographic algorithm fulfils one of four basic purposes:

As well as thinking about all of that good stuff it might be worth looking for clues in the design of the rings. Bruce must have had something in mind when designing the rings.

Here are the obvious things to notice:

I'll be chatting with a coupe of colleagues to see if we can put our heads together and also watching to see what the winner comes up with.

Interesting ideas - I've been thinking about the use of the rings as a signing mechanism rather than encryption. Signing is a far more prevalent problem in communication than encryption - it gives you three things...

I think this is really interesting - I've read several books on the topic of cryptography, and I think thinking about the rings as being public keys in a public/private key encryption might be one method - but I'm guessing that this might be a bit heavy for messages that otherwise would be left on the fridge! Another Idea might be to use a combination of a substition cipher and the spartan scytale (http://courses.gdeyoung.com/pages.php?cdx=168) using something like a pencil, biro, lipstick as the dowel.